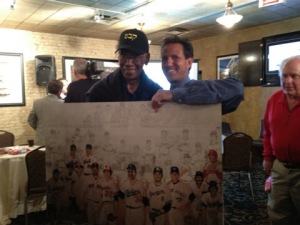 Ernie Banks holding a copy of the Work of Art in its early stages at a charity event to benefit Team Israel’s quest to earn entry into the World Baseball Classic.  The Work of Art was auctioned off earning thousands for the cause.

Every player, executive, sportscaster, or entertainer depicted in the Work of Art was allowed to designate a charity of their choice to receive funds from this project.  The goal of this project is to raise $500,000 for these worthwhile charities.  The charities selected to receive funds are the following, with the amounts already received to date noted.

*We are always accepting new charity opportunities, to inquire about how email us at info@jewishbaseballplayer.com.

In addition to the monetary donations, which will be made to the above charities, we will offer and anticipate that a Work of Art will be displayed in the following venues:

The Baseball Complex being built in Israel